The Holga Wide Pinhole camera was released in 2008, but hasn’t been produced for a number of years. Despite its plastic cheap feel you expect from a Holga, it’s gained a reputation for being a good pinhole camera. Over the last few months they’ve appeared twice on Amazon. Mike Gutterman of the Negative Positives Film Photography Podcast became aware of this and shared it with both the Negative Positive Podcast Facebook group, and the Lensless Podcast Facebook group. I ignored it the first time it came up but took the bait the second time it appeared. I’m blaming this purchase on Mike.

The camera itself features an f/125 aperture, and dual 0.3mm pinholes. The horizontal exposure can give you a maximum wide 120 degree shot on 120 film. The camera comes with two masks that can be inserted, allowing you to shoot 8 frames at 6 x 9, or a slightly wider 6 frames at 6 x 12. On the top of the camera you’ll find a spirit level and lines that represent your viewfinder. Because it’s a Holga, I used gaffer tape to keep the camera closed after loading the film. I also put a strip over the red exposure window on the back. The shutter button allows you to connect a standard threaded shutter release cable.

For my first roll, I shot some Kodak Verichrome Pan that expired in September 1989 and decided to use the 6 x 9 mask in the camera. After my first three shots, I remembered that I was shooting wide and needed to skip every other frame. The first three images created a unique overlapping double-exposure. The Holga 120 WPC is fun to use. I’m happy with my initial shots and looking forward to shooting more pinhole. 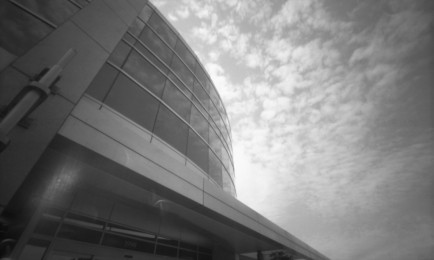