One of the coolest things about the online film community is the generosity of film photographers. Last year I emailed Natalie Smart, a Brighton UK film photographer after reading one of her blog posts. Seeing that she had just purchased a Hasselblad 500 C/M, I had several original Hasselblad brochures, and some other film items I thought she might be interested in, so I sent them to her. Natalie asked how she could return the favor and I asked for one of her darkroom prints. In return, she not only sent me a print, but several film-related items. One item she sent was a roll of Lomography Berlin Kino 400 film.

I’ve had an interesting experience with Lomography film over the years. Whenever I’ve shot with Lomo film, my shots have never looked anything like what they’ve advertised. Even when processed at a lab, my colors don’t look the same, or the black and white contrast is just meh. With the Berlin Kino, I decided to shoot it at box speed, and develop with CineStill DF96 Monobath. This is probably the first time I got what I expected with Lomo film. The film has a lot of grain. And the contrast is either just right or too little. And that’s exactly what I’ve seen in other examples of this film. 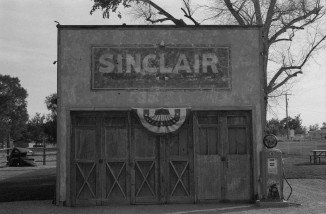 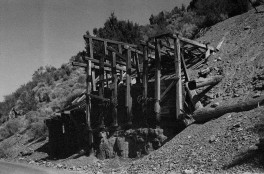 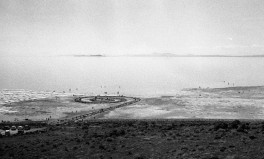 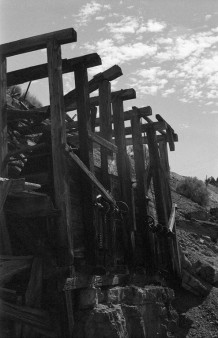 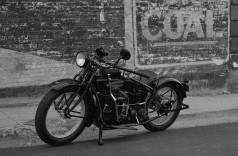 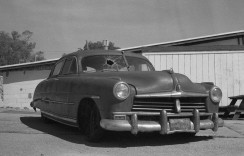 A few miles away from my house an abandoned Datsun 280ZX has been sitting in a private parking lot for several years. Each time I drove past it, I thought how I should stop and capture some images of the car as it slowly became surrounded by weeds and the exterior became more weathered with each passing season. I’m glad I stopped to photograph the car because the next week, it was gone. 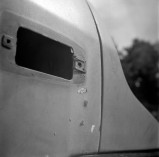 Here are some additional photos with the Close-Up Lenses No. 2 on the Yashica Mat-124 G. These were shot on expired Kodak Tri-X. The resulting images have a lot of grain. 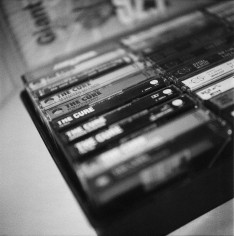 Since having my Yashica Mat-124 G CLA’d by Mark Hama, I’ve used it more often. And recently found another film photographer on Facebook that was selling a set of close-up lenses for Yashica TLR’s. The set of lenses includes one that goes on taking lens, and the other on the viewing lens. According to yashicatlr.com, Yashica made close-up lenses that were both slip-on and bayonet mount. And two separate sets of close-up lenses were made for the Mat-124 G: No. 1 allows focusing as close as 44-61cm, and No.2 allows focusing as close as 36-45cm.

The first attempt I made at using these lenses was back in the spring when my wife and I went to our local nursery to buy vegetable plants for the garden. I thought using these close-up lenses in the greenhouses would make some interesting photos. The photos were all taken at f/3.5, hand-held. I think I could have done better with a tripod. 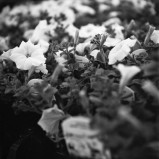 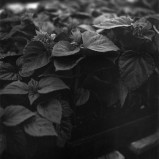 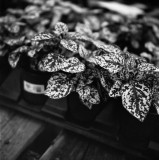 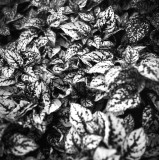