My 13-year old loves to tease me about using the Barbie camera. When I pull it out of my camera bag, his reaction is a combination of silliness and flamboyance, “Are you shooting with your [high pitched voice] Barbie camera today?”

The Barbie Instant Camera was made in the United Kingdom by Polaroid in 1998. Next to the Tasmanian Devil and Spice Girls camera, it’s one of the more collectible Polaroid cameras made in the 1990’s. Originally, the Barbie Instant Camera came packaged with flower stickers so you could decorate the camera, or your photos. The camera features a pink, purple and lime green plastic body and uses Polaroid (Impossible Project) 600 film. At the time of the release, Polaroid manufactured a matching Barbie-framed instant film. The film matched the flowers on the camera and could be drawn on with a purple magic marker. The plastic lens is 116mm, f/11 single element. The camera also has a close-up lens for shots .6 – 1.2m (2 – 4 feet) that slides out in front the main lens and viewfinder. Exposure is automatic and the shutter speed is about ¼ – 1/200 of a second. Like other plastic body instant cameras made by Polaroid during this period, it has a built-in electronic flash than you can override with the shutter button.

A more difficult camera to write a serious review about than to actually use. Compared to some of the other Polaroid 600 Instant Film cameras I own, the Barbie camera works the best. Probably because it was manufactured more recently. To test the camera, I shot with Impossible Project Black & White, Black Framed, 600 Instant Film. This is some of IP’s first generation film, and had expired two years ago. Even though the film was refrigerated, this is what I expected from gen-1 film. Will I use this camera again? Of course, because it gives me an opportunity to embarrass my son in a crowd of people! When I open the camera, people can’t help but smile and laugh because it’s not often you see a 45-year old man packing around a pink and green Barbie camera. 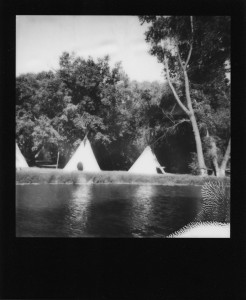 Adorama – Visit Adorama for a full line of Impossible Project Instant Films for your Polaroid camera. Like the 600 Black & White Film 2.0 with Black Frame. The updated version of the film I used in the images above, but better! An entirely new formulation will give you sharp, fully developed images, in 20 seconds.