Some of Maurice’s Graflex Collection

This post wouldn’t be possible without my good friend, Maurice Greeson. Last winter, I was talking to Maurice about what an interesting camera I thought the Super Speed Graphic was. How you rotate the lens clockwise to cock the shutter, and the built-in electric shutter. Sure enough, Maurice had one and loaned it to me. He even loaded up two film holders for me to try. The camera sat in my office for several months because nothing outside in the winter landscape inspired me. A few weeks ago, I met up with Scott Smith at the Great Salt Lake Shorelands Preserve in Layton, Utah. Scott is deciding whether he should get into large format photography, and he’s been kicking the tires on a Graflex before he buys it, on loan from Maurice.

The Super Speed Graphic was manufactured by Graflex in Rochester, New York, from 1961 -1970. The Super Graphic (1958 – 1973) and Super Speed Graphic would be the very last large format cameras that Graflex would make. These two models are nearly identical. The Super Speed Graphic features a 135mm, 1/1000th Sec Graflex Optar lens. To cock the shutter, the chrome lens hood is twisted clockwise. Using two 22.5 volt flat batteries, the shutter can be triggered by pressing a red button on the left-side of camera above the hand strap. This causes the solenoid built into the Super Graphic lensboard to trip the mechanical shutter. However, the built-in solenoid will only trigger the shutter and will not sync with the flash. A shutter release cable can also be used, connected directly to the lens. I found it very difficult to connect a release cable because there’s no room between the lens and the lensboard for you to twist on/off the cable. On top of the camera is an automatic focusing scale with a flash exposure calculator. The front standard of the camera has the movement features you’d expect to have: rise, tilt and swing. The camera itself is made from cast metal, unlike older Graflex cameras made from wood and metal. Surprisingly, this camera is heavy, 5.29 lbs. I’m comparing this to my Crown Graphic Pacemaker at 4.8 lbs. Overall, not my favorite camera, but I’m grateful to Maurice for letting me try it out. I’m very happy with the photos. All of them were shot at f/16, 1/60th sec. 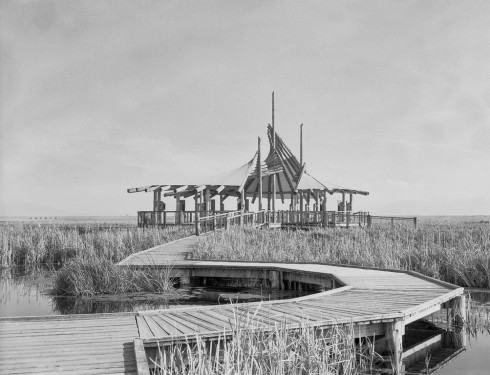 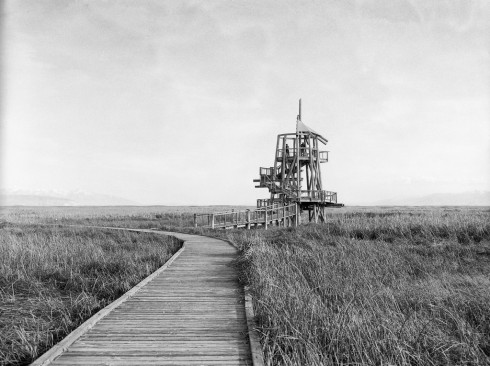 Learning to shoot analog in a digital world. UtahFilmPhotography.com is dedicated to sharing information, sharing experience and sharing knowledge about film photography and vintage cameras. END_OF_DOCUMENT_TOKEN_TO_BE_REPLACED
This entry was posted on Wednesday, May 16th, 2018 at 8:00 AM and tagged with 4x5, Arista EDU, Black & White, Black & White Film, Black and White, Black and White Film, Graflex, Large Format, Super Speed Graphic and posted in 4x5 Film, Graflex, Large Format. You can follow any responses to this entry through the RSS 2.0 feed.
« Mechanical Shutter Testing Part 2 & Giveaway
Nikon F2 Photomic (1971 – 1980) »