This post has been in the works for a long time. Why? My friend Mike Williams gave this camera to me almost 6 months ago, Christmas 2017. Mike knew I’d been very happy with the Nikon F and Nikomat FTn. And to this day, Mike says this is his best find at Goodwill. I think he’s right because the F2 Photomic still commands a high price online, especially one in this shape.

The F2 was introduced by Nikon in 1971, and is the successor to the Nikon F. It was discontinued in 1980 when the F3 was released. The original F and F2 cameras look nearly identical with the only difference being the meter mounted atop the camera body. The F2 features shutter speeds of 10s to 1/2000th sec, where the original F was 1 sec – 1/1000th sec. The ISO can be set from 6 to 6400. One item I came to appreciate on F2 Photomic is the meter. It’s activated by the shutter advance. When the advance arm is in its resting position, the meter is active. When pressed in towards the body, the meter turns off. On the F with FTn, you must press a button on the side of the meter to activate it, and then remember to push another button down to turn it off. What does this mean? The F2 Photomic isn’t going to eat batteries because you forgot to turn the meter off. Improvements were also made to the flash sync over the F. The F2 has a flash sync of 1/80th sec, where the original F has a sync of 1/60th sec. Another commonality between the F and the F2 is the weight. The F2 Photomic with lens weighs over 2 lbs! 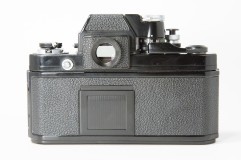 According to Ken Rockwell, the F2 was “king of newspaper and magazine photography in the 1970’s.” And the development for the camera was driven by NASA for the Apollo and SkyLab missions. I found this comment from Ken Rockwell somewhat humorous: The Nikon F2 is so good that many photographers — including myself — preferred to pay more for used Nikon F2s in the early 1980s after they were discontinued than to pay less for a brand-new Nikon F3 with which Nikon replaced it. The Nikon F3 was electronic, and was not trusted to meet professional demands under all conditions.

The Nikon F2 is simply a great camera. One of the last mechanical shutter camera bodies made before electronic shutters appeared in the 1980’s. The F2 is a solid camera. If you didn’t know any better, you could pound nails with the body. Within a dozen shots taken with this camera, I decided that a telephoto lens would be a nice addition, so I purchased a Nikkor 35 – 200mm, f/3.5 – 4.5. 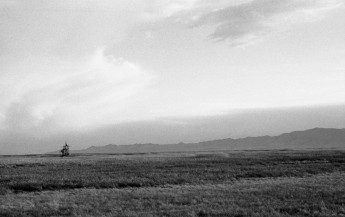 Learning to shoot analog in a digital world. UtahFilmPhotography.com is dedicated to sharing information, sharing experience and sharing knowledge about film photography and vintage cameras. END_OF_DOCUMENT_TOKEN_TO_BE_REPLACED
This entry was posted on Wednesday, May 30th, 2018 at 10:34 AM and tagged with 135 Film (35mm), 35mm, 35mm Film, Analog, Black & White, Black & White Film, Black and White, Black and White Film, Kodak, Nikon, Nikon F2, SLR, Vintage Cameras and posted in Nikon, Vintage Camera Review. You can follow any responses to this entry through the RSS 2.0 feed.
« Graflex Super Speed Graphic
The Negative Positives Double-Exposure Film Exchange »