After being a guest on The Negative Positives Film Photography Podcast with Mike and Andre, I offered to help with a double-exposure film exchange. The idea behind a double-exposure film exchange is that one photographer shoots a roll of film, rewinds the film, and then sends it to someone else, who then shoots on the same roll. Listeners of the podcast signed up via a Google form and filled out their preferences to shoot black & white, color, etc. The resulting shots can be anything from artistic to crazy.

The response to the exchange was fantastic, being that it was the first time. Forty-two photographers from around the world signed up, shooting a total of twenty-one rolls of film. Some listeners were so enthusiastic to shoot and share that they signed up twice.

My partner for the Negative Positives Double-Exposure Film Exchange was Dan Cottle from Birmingham in the United Kingdom. Dan provided a roll of Ilford HP5+ black & white film, and shot the roll around his city, including Cadbury World where they produce some of the world’s best chocolate. Dan was even kind enough to send a Cadbury Egg to me with the exposed roll of film, which my wife promptly enjoyed.

After receiving the roll of film from Dan, I set out and exposed it a second time around my part of the world in Utah. Many of my shots included the Utah State Railroad Museum and the Hill Aerospace Museum. While Dan and I planned to line up our shots in the camera, it didn’t quite work out as planned. And from others in The Negative Positives Film Photography Podcast Facebook Group, their intentions were the same.

This film roll exchange was a great way to become acquainted with another film photographer. It was also a good exercise at some abstract previsualization. We didn’t set any rules and had no grand expectations. However, our resulting images are interesting, mysterious, and creative. 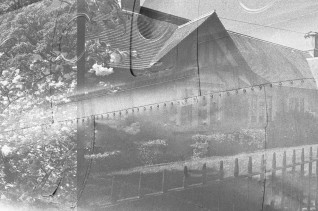