The Yashica Mat-124 G is known as being the last TLR (twin lens reflex) camera manufactured by Yashica from 1970 to 1986. In a time where camera manufactures had abandoned TLR’s, the Mat-124 G was very much out of place, but very successful. The Mat-124 G is nearly identical to the earlier 124 model. The only differences being cosmetic, the 124 G is all black, some electrical changes were made along with the pressure plate slides internally. 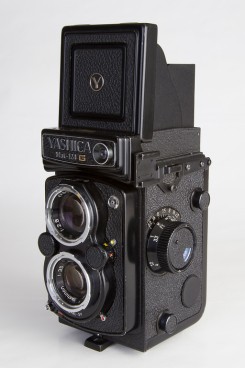 Featuring a four-element, Yashinon 80mm f/3.5 taking lens, and a 80mm f/2.8 viewing lens, the Mat-124 G has a Copal-SV shutter with speeds from 1 to 1/500 sec, bulb mode, self-timer, MX flash snyc selector and shutter locking device. On the top of the camera is a Cadmium Sulfide (CdS) meter powered by one modern PX-625 battery. The meter is match-needle based on the preselection of the shutter speed. The film advance crank on the right-side of the camera automatically stops, preventing accidental double-exposures and proper spacing on the film between images. The focus knob on the left-side of the camera extends and retracts the front panel containing the taking and viewing lenses. The shutter button is threaded for a standard cable release and the bottom of the camera is threaded with a standard ¼” tripod socket.

I bought this camera because I really enjoy shooting 120 film, Kodak Tri-X being my favorite. I’ve also enjoyed using my Yashica A and wanted something with a meter and a better focus screen. The Mat-124 G meter powers itself on when you open the focusing windows on top of the camera. While Zinc Air batteries don’t last as long as the old mercury ones, at least I don’t need to worry about forgetting to replace the lens cap or flipping a switch to save the battery. The physical location of the shutter speed and aperture dials make this camera easy to use. While the ground glass focus screen is bright and sharp from edge-to-edge, I find myself using the built-in magnifying lens over the top of the focus window frequently to ensure that I’ve nailed the focus. The focus screen is considerably better than my Yashica A, plus there’s still a number of vendors that sell and install replacement glass for better viewing on the 124 G. The taking lens is a bayonet mount for accessories. I’ve found that buying an original metal lens hood, or 30mm filters, can be very expensive. Overall, the camera is built like a tank and produces a wonderful 6×6 medium format images. Below is a selection of photos taken on three different types of film: Lomography Color Slide / X-Pro 200, Fujifilm Reala 100, and Kodak Vericolor HC (Expired 3/91). 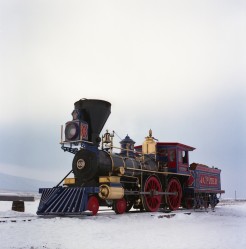 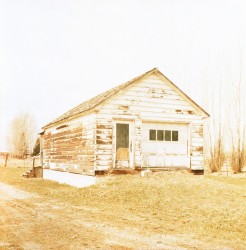